A first encounter with SOFIA I cannot perceive the scale of the universe, but I can perceive the scale of a jumbo jet as I stand beneath it. I’m on the tarmac, surrounded by fuel trucks, wearing a high-vis vest and Aviation Security Service identification tag that says “escort required”. I want to touch something, perhaps a wheel, but I don’t think I should. 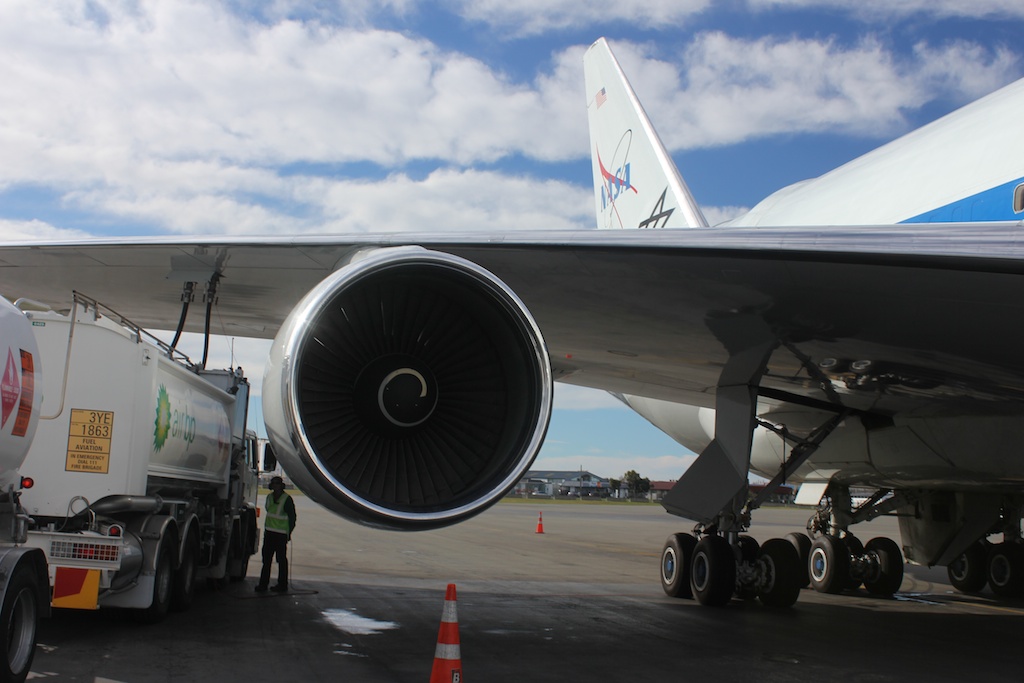 The plane has seatbelt and no smoking signs, emergency exits, small oval windows with plastic shades and a single aeroplane toilet. Seats with seatbelts positioned in front of computers. Walls covered with wires and plastic that looks like yellow cellophane. Displays with lights. Mysterious instruments. Sinister cylinders with flexible metal pipes. Liquid helium. It’s the most dangerous part of the on-ground operation, handling liquid helium. I’m carrying a heavy bag with a laptop, and a bulky camera. I’m worried I might bump into something. 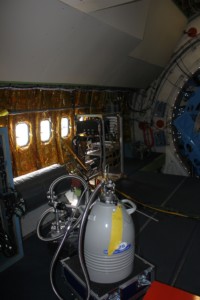 We stand beside a 6.4 metre bulkhead that can resist half a million pounds of pressure. Behind it is a 10 tonne telescope 2.5 metres across. It moves on a cast iron bearing 1.2 metres in diameter. It’s steadied by gyroscopes. I’m awed that they open the door of the plane at 35000 feet so the telescope can view the sky; apparently I should be more impressed by the gyroscopes. I’m not even sure what a gyroscope is. Eric tells me they can keep the giant telescope pointing at a dime, four kilometres away. Finally, I start to understand.

Sit still and point your finger in front of you. Your hand probably seems reasonably steady. Now focus on something small and distant. Close one eye and look along your finger. Keep it still focused on your distant dot. Not so steady now? Stand up, move around, maybe jiggle up and down. Still focused on the dot? That’s what it’s like putting a telescope on a plane.

Spinning tops – balancing themselves as they spin – are simple gyroscopes. More complex ones are used to keep objects steady when all around them is moving. Steadying a giant telescope on a jumbo jet requires the most advances gyroscopes, developed by the military to shoot things from planes. I like that this technology has found a kinder application.

The plane that I am standing on – NASA’s Stratospheric Observatory for Infrared Observation, or SOFIA – has brought together a series of most remarkable technologies, all to solve a simple problem. The atmosphere sits between us and the stars. It is the enemy of astronomers. The dust, gases and vapours that keep us alive frustrate their desire to observe what lies beyond. For infrared astronomy, water vapour is the particular foe. Even on a perfectly clear night in the desert, there is too much for more than a glimpse. So they break free of the atmosphere, putting their telescopes onto planes or into space.

Infrared astronomers – those that view stars through heat rather than light – are trying to fathom the very heart of our galaxy. There’s nothing much to see – it’s a black hole, invisible against the backdrop of space. But it is surrounded by a mysterious halo of heat, something that infrared telescopes capture perfectly. And there is no better place to observe it than New Zealand. Partly it’s the convenience of using the US Antarctic Programme’s Christchurch base, partly it’s the lack of continents to create turbulence in the stratosphere high above us, partly it’s the fact that we willingly share our airspace with the US. But mostly it’s our latitude. As the earth spins and wobbles its course around the sun, altering our seasons and our view of of sky, 40oS is precisely positioned, during the southern winter, to gaze at the galactic centre. So Eric is here, with SOFIA and the crew of more than 60 Americans and Germans who make up the mission.

I ask him what drew him to astronomy, and he’s disarmingly honest. He was a student, studying physics, looking at the stars. One day he flew on the Kuiper Airborne Observatory – SOFIA’s predecessor – and fell in love. Flying with telescopes on planes, that’s his buzz.

That’s why he’s here. And now he’s waiting for his moment.

Tomorrow night, SOFIA will fly. The mighty craft will lift off from the Christchurch runway, ascending through the clouds, brushing aside the obscuring veils of vapour, until she is a tiny metal speck on the very edge of the emptiness of space.