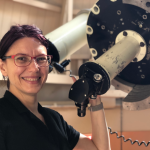 14 September 2021
World Space Week 2021 is about women in space. We interviewed the Executive Director of the World Space Week Association, Maruška Strah who explains what the event is about and how can you participate.
Archived: Events
0 comments

31 March 2021
What to feed to your basil plants (aka fertilisers) and what has that got to do with stars.
Archived: Education and Outreach | News
0 comments

AHiS 2021 – What to measure for your school project

31 March 2021
When you submit a report or a poster you get in the draw to win a planetarium visit to your school and some other awesome prizes.
Archived: News
0 comments

31 March 2021
Give your basil plenty of warmth and light. It grows well in a warm environment, with the optimum temperature being 22 to 30 degrees Celsius. Keep it well lit when growing it indoors, for instance under fluorescent lights in the room or place the container closer to a desk light.
Archived: Education and Outreach
0 comments

30 March 2021
The first five days of the space basil went great, the plants are healthy and grow well.
Archived: Education and Outreach
0 comments

AHiS 2021 – Setup your own plant growth chamber on Earth

30 March 2021
How to set up your own growth chamber for your seeds, at your school on Earth.
Archived: Education and Outreach
0 comments

30 March 2021
The plant chamber for basil and starting the experiment. A brief overview of how basil is grown on the International Space Station
Archived: Education and Outreach | News
0 comments

10 December 2019
The First Nation (indigenous) peoples of Aotearoa (New Zealand) are known as the Māori. Māori have an oral tradition of reciting the Whakapapa – the genealogy of human origins back to the beginning of the Universe – recognizing the Sun, the Planets, and other stars as senior progenitors of humanity which, in these stories, included many of the stages in a process that parallels the western hypothesis of the Big Bang.
Archived: News
0 comments

23 October 2018
Hans Huybrighs from Max Plank Institute is visiting Wellington. He will give a talk for the New Zealand Astrobiology Network in partnership with Milky-Way.kiwi, News from the Galactic Centre talking about water volcanoes on Europa, and what is it like to be tasting an extraterrestrial ocean.
Archived: Events | News | People of Astrobiology | Seminars and Workshops
0 comments

15 October 2018
Daniella Scalice, Education and Communication Lead for the NASA Astrobiology Program is coming to New Zealand in October. In 2005 she and her Diné colleagues co-founded the “NASA and the Navajo Nation” initiative, an ongoing collaboration that has produced classroom materials, teacher trainings, and student summer camps which weave together Western scientific and Navajo Cultural knowledge. We are looking forward to welcoming her to New Zealand.
Archived: News | People of Astrobiology
0 comments