30th of June was chosen to mark the anniversary of the 1908 Siberian Tunguska event. On June 30, 1908, an explosion over Siberia flattened trees and made a loud noise. But no crater was ever found. Scientists now believe it was a small comet or asteroid. Many events like these happened in the past. 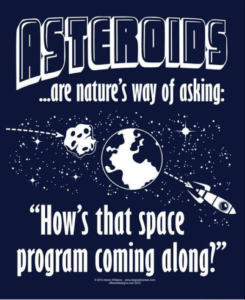 Closer to our present days, in February 2015, people from Auckland had the chance to observe a fireball crossing their sky. Nothing bad happened in the end and nobody got hurt. But were we just lucky? And can we predict anything like this?

To raise awareness of such events, Asteroid Day has been created.

What began as a scientifically-based declaration about the need for rapid discovery of asteroids to ensure the defense of our planet, grew to a global movement of awareness regarding this solvable nature-caused problem that included more than 500 self-organized events around the globe across 72 countries. Through the technological capabilities of the scientists on our planet, Asteroid Day put out the challenge to collectively obtain the data about our solar system that will allow us to have the knowledge about our near-Earth objects in order to prevent future destruction to our planet and subsequently verity efforts to deflect those asteroids away from Earth’s orbit.

If we work together, we might have the chance, for the first time in humankind’s history, to do act preventing these threats to our planetary security. The branch of security which deals with asteroid threats is called planetary defense.

We are not yet equipped with solutions to deal with an asteroid that would come our way right now. Planetary defense is still an emerging domain. However, the team from www,asteroidday.org is convinced that if we all could sign the Asteroid Day Declaration, things could change for us here on Earth.

Asteroids might have brought life on Earth, (or Mars). It is known they wiped off the dinosaurs, and left craters all around the world. Professor Kathy Campbell describes their impact in her radio interview, the Sixth Mass Extinction. Creating awareness for such events it is a salutary initiative and you can find more information on asteroids on www,asteroidday.org.