When I was in primary school, I remember pouring through numerous space factoid books – the kind that have a colorful page and a “Did you know?!?” box for each of the (then) nine planets. When I turned the page after Pluto, I would always be slightly disappointed because there were no more planets to learn about. Surely – my 7-year-old self reasoned – there are billions of stars out there, and so there must be billions of other planets too. I wanted to see colorful pictures and read interesting facts for all those other planets! Now, nearly two decades later – through some combination of wonderful teachers, hard work, and serendipity – I am finally finding out about all those other planets.

My name is Joshua Krissansen-Totton and I am currently a graduate student at the University of Washington in Seattle. In August of 2013 I moved from Auckland to Seattle to begin a dual-title PhD in Earth and Spaces Sciences and Astrobiology. I decided to do my PhD at the University of Washington because it is one of the few universities in the world with a dedicated astrobiology graduate program. 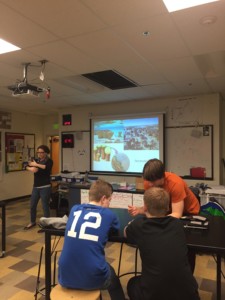 I have had the opportunity to dabble in a variety of planetary science topics through my PhD research: I have studied how Earth’s atmosphere became oxygen rich, helped develop methods for detecting volcanoes on exoplanets, and investigated whether Earth-like exoplanets can be identified using color. My current research explores how we might detect life on exoplanets in the future with the next generation of large space and ground-based telescopes. The idea is that any life – even if it is very different from Earth-life – will probably produce waste gases that will alter the atmospheric composition of its host planet. If the atmospheric composition of exoplanets can be measured using telescopes, then it might be possible to infer the influence of biology.

My undergraduate training at the University of Auckland was excellent preparation for the interdisciplinary research I’m now doing as a graduate student. I studied physics and mathematics as an undergraduate, and this strong quantitative background has served me well in planetary science and astrobiology. Additionally, my undergraduate research in both theoretical biology (a summer research project) and climate science (my BSc Honors project) broadened my interests and prepared me for the many unexpected challenges of scientific research.

In 2013 I was awarded a Fulbright Science and Innovation Graduate Award to pursue my doctoral studies in the United States. One of the advantages of being based in the US is that there are ample opportunities to travel for workshops, conferences and summer schools. In particular, the University of Washington Astrobiology Program organizes annual workshops to introduce students to different disciplines in astrobiology. These have included a trip to Eastern Montana to study mass extinction events in the fossil record (and dig up dinosaur bones), a research cruise on the Pacific Ocean to learn basic oceanography, and an upcoming trip to Yellowstone National Park to learn about life in extreme environments. Although I am primarily a theorist, these excursions have helped me ground my understanding of geophysical and biological processes.

Being immersed in astrobiology for several years has made me realize that we have long way to go before the exoplanet pages in the factoid books can be populated with the colorful images and detailed facts that would have satisfied my 7-year-old self. However, the ambitious goal of detecting life on exoplanets is achievable in the coming decades, and I am privileged to be a small part of that endeavor.